We have been successful in helping to improve the health of patients with the following conditions:

To name only a few…

“I came to Holze Wellness Center because of a face rash and bad acne. I woke up one day with a small rash on my face. I didn’t think much of it at first, but every-day the rash only got bigger. The rash was very red and irritated. I also had horrible cystic acne covering my face. I was so embarrassed to go to school, as kids would always comment on my face.

I tried everything to make it go away. I switched my diet, exercised, applied face creams, and even saw a dermatologist. All of these actions did not make my face any better. I was becoming frustrated and impatient for an answer as to what caused this outbreak. My mom looked online for a different doctor that I could see.

That is when she found Holze Wellness Center. My first visit with Dr. Holze was an eye-opener that gave my mom and me some hope. Dr. Holze was able to find out what was causing my face acne and other facial reactions. I started taking remedies every day and within the first month of seeing the doctor, I already was seeing improvements. The longer I saw the doctor and took my remedies, the faster my face cleared up. The painful cysts on my skin went away and the rash completely disappeared. The results completely exceeded my expectations.

All because of Holze Wellness Center, I feel so much better, physically and emotionally. I now have a clear face and am not afraid to go about my day with no make-up. I am so happy that my mom and I decided to go to Holze Wellness Center. I would recommend that anyone and everyone give it a try.” 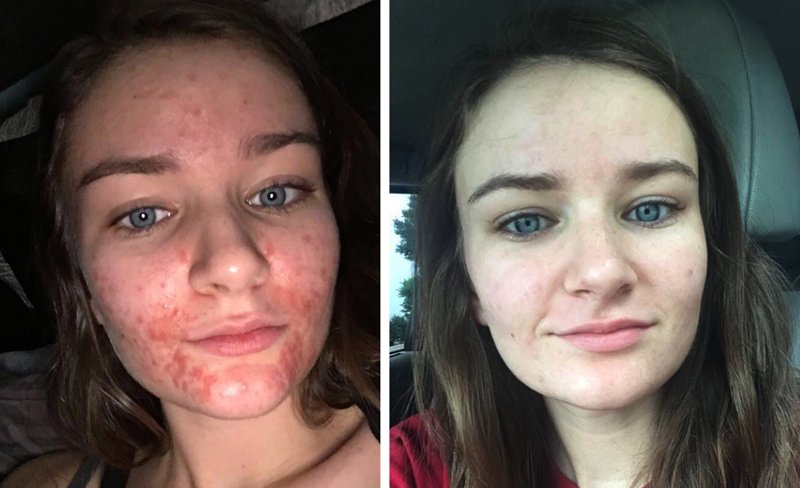 If you have struggled with clearing stubborn acne anywhere on your body and would like to learn more about treatment options, please call or fill out our contact form to schedule an appointment!

We provide a high level of diagnostic and treatment services to help your specific condition.

If your condition warrants additional diagnostics, hair analysis, urinalysis, salivary tests, and blood tests, they will be recommended.

Based on the muscle testing and possible blood test, a vitamin and mineral program is set up to support the chemical aspect of your health triangle. After all, what good does it do to adjust your spine if the muscles and ligaments holding it in place are too weak to maintain the adjustments? Nutritional supplements, along with dietary suggestions, will help strengthen the chemical aspect of your body. Once again, this program is monitored at each visit as requirements increase or decrease. This careful monitoring of nutritional assimilation prevents both wasteful excess and unnecessary deficiencies from slowing your return to health.

The doctors at Holze Wellness have spent considerable time researching the vitamin market for the best products. For your own convenience, as well as for the most effective treatment, we stock the supplements you will need in our dispensary. To prevent variables in your treatment and for you to get the most out of the supplements, we ask that you use only the brands recommended by the doctor.

Available only through licensed healthcare practitioners, Nutri-West products are made to the industry’s most exacting standards. Each of the more than 3,800 raw materials used in these formulations undergo regular and random lab analysis to ensure purity and potency. These rigorous standards have earned Nutri-West Wyoming’s coveted blue-ribbon award for drug manufacturing excellence. Unlike the typical commercially available products these supplements are formulated to guarantee results. We firmly stand behind these products and have seen amazing results in many of our patients. For more information on this product line go to www.nutriwest.com.

The recent advances in genetic research have finally reached a point where we can begin to look at specific genes and what their functions are. With the recent completion of the genome project, research is mounting as studies are being conducted and associations being made as to the relevance of genetic variants to disease causation. One such area of research has led to a major breakthrough in our understanding of the origins of cancer, heart disease, osteoporosis, autoimmune disease, chronic fatigue syndrome and so much more. This connection between our genetic variants or SNiP’s (Single Nucleotide Plolymorphisms) and disease has revealed the importance of a metabolic pathway in the body that is critical to maintaining health, the methylation cycle. The methylation cycle, it turns out, is involved in many regulatory processes and genetic defects that can be particularly damaging. The good news is that we now have ways to bypass these defects with specific targeted nutrients and restore normal functioning to the body.

Methylation is the process of a transfer of a methyl group (one carbon atom and three hydrogen atoms) onto amino acids, proteins, enzymes, and DNA in every cell and tissue of the body to regulate healing, cell energy, genetic expression of DNA, neurological function, liver detoxification, immunity, etc. This process is one of the most essential metabolic functions of the body as catalyzed by a variety of enzymes. The methylation process is responsive to environmental conditions and degrades with age, a process associated with a large variety of age related disorders. Thus, with respect to the effect of methylation, it is a continuous struggle in life to adapt to the ever-changing environment. Health and quality of life are highly dependent on the methylation process.

This is such a new and emerging science but one that holds great promise in the natural health care realm. The results that are being seen in the preliminary stages are astounding. Understanding the cycle does take some time and study, but for health care practitioners and patients alike the rewards are tremendous. Prevention of those conditions that we consider “inherited” is well within our grasp.

The Importance of Methyl Donors in the Body

The methylation cycle performs many vital roles in the body. First, by means of SAMe, it supplies methyl (CHE3) groups to many different biochemical reactions. Some of them produce substances such as coenzyme Q-10 and carnitine, which have been found to be depleted in many chronic fatigue patients. Methylation also plays an important role in “silencing” certain DNA to prevent its expression, and in producing myelin for the brain and nervous system. Some key areas that methylation plays a role in are:

Methylation is also central to such critical reactions in the body as:

When the methylation cycle is blocked these important roles are not carried out properly.  In addition, a methylation cycle block causes a block in folate metabolism, to which it is intimately linked, and this interferes with synthesis of new DNA and RNA, among other important effects and can be seen associated with birth defects and cancer.

Two of the most significant effects of a methylation cycle block are that neither the immune system nor the detox system can operate properly.  If the methylation cycle remains blocked for an extended period of time, infections and toxins will build up in the body.

Because it’s involved in so many processes, inefficient function or mutations along the methylation pathway can result in a wide range of conditions, including but not limited to the following:

The bottom line is that through focused genetic and kinesiological testing and the application of Nutrigenomics we can:

We will be evaluating your individual methylation patterns through genetic (DNA) testing and muscle testing to determine approximately where these genetic glitches are and recommending supplementation to achieve a “genetic bypass” of your particular DNA mutations.